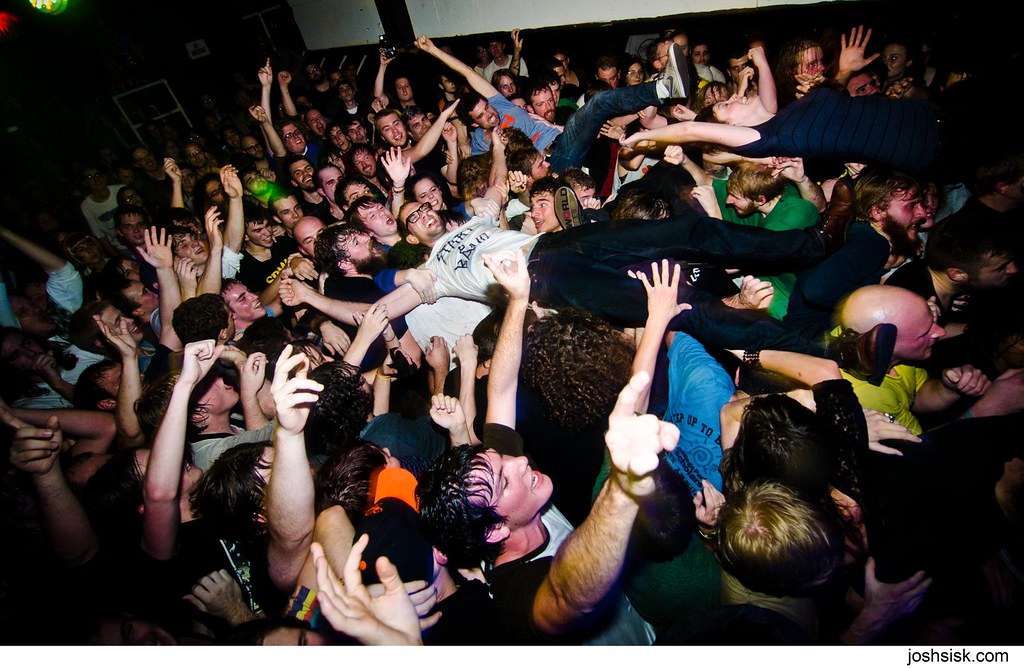 Great show, best night. I stage dove, in fact all the photographers stage dove… wait, EVERYONE stage dove. Denny’s dad held it down at the front for the whole show! So much fun, what a good send off for one of the best bands the city has ever seen. Thanks for the memories, guys. Continuing the Double Dagger last shows train, last Thursday I went to see them at Death By Audio in Brooklyn… the kids there love DD, apparently, and the show was so full of singalongs and stagediving and crowdsurfing, I was nervous the Baltimore true finale might find it hard to top this… This was a fun show, and pretty packed, in the Backstage of the Black Cat. The popular belief is that DC kids do not dance at shows, but that was proven untrue here… while it was not as wild as Baltimore or NYC, Double Dagger fans got moving and the band worked up a sweat. It was a great time, and a great start to 3 days in a row of me seeing this band. As most readers of this site probably know, this week ends with the last 3 Double Dagger shows ever. The band is calling it a day… one of the best punk bands, the best bands in general to ever come out of Baltimore, and all friends of mine as well. I have been seeing their shows for years, photographing them for years. In fact, Double Dagger was one of the first bands I shot after deciding I wanted to pursue concert photography seriously, and the above close-up of Nolen with the microphone was from that very show. It was taken while he was precariously standing on my chair (why were there chairs at Hampden Fest? I’ll never know… obviously they were expecting a different kind of band), singing down at me the words to “Camera Chimera”, their song about the over-whelming presence of the camera eye in our lives. Sorry, Nolen! Right after I took it, the guy next to me turned to me and said “That’ll never come out.” A week later, it made Explore (the top 200 photos on Flickr). One of the best things about Double Dagger is their sense of humor; their smart/punk sensibility. After a “drums in the crowd” issue the previous year’s Whartscape festival, Dan Deacon told the guys specifically “don’t throw any drums in the crowd this year”. So of course, that was the first thing they did in 2010 – throw plastic inflatable drums! There are about a hundred more examples, too. They also are a band who managed to write songs about important topics in out lives, and within our communities, but at the same time kept them fun & catchy… something so few punk bands have managed to do. So many of their songs resonate to Baltimoreans (but I imagine, everyone also) as reflecting aspects of the city and community we live in. It’s great to see so many younger kids at their shows… inspired not just by the wild stage hijinx (though there is plenty of that), but by the thoughtful content of the songs.

They are going to be missed. Come out to the last shows, I’ll be there.

See more of my photos of Double Dagger below, or click here to see all of the ones I have up on Flickr.

END_OF_DOCUMENT_TOKEN_TO_BE_REPLACED The best rock band in Baltimore. This show was great, their shows are always great. See them when they play near you. I dunno why I didn’t post this before! Last month was a great reunion/last show at CCAS – the Spark and Never Enough, two early-2000s hardcore bands from Baltimore played a reunion show with Ruiner, who is breaking up. Double Dagger played too. It was great, though I got moshed HARD and hurt my neck. I’m better now. Jesse Morgan got stitches too! A few weekends back, I managed to go see Hollywood wreck the Golden West, then check out Dave Nada’s last Taxlo before he moves to LA to become a famous record producer, then Hampden Fest to see Double Dagger and Sick Weapons. (And THEN I went to shoot Vampire Weekend/Beach House/Dum Dum Girls, which I will post in it’s own blog entry soon). What a weekend, I love Baltimore.